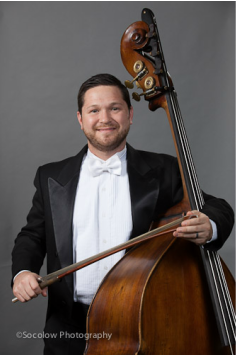 Mr. Gabriel Katz
Mr. Katz has degrees in both music performance and music education. He worked as a professional musician in full time orchestras in South Africa, China, Macao, Singapore, and all over the US. While performing he was forunate to teach at Universities abroad. His private teachers include: Hal Robinson (Principal Bass of the Philadelphia Orchestra), Tim Cobb (Principal Bass of the New York Philharmonic) and Jeff Turner (Principal Bass of the Pittsburgh Symphony).

He holds a Bachelors degree in Bass Performance from SUNY Purchase, a Masters degree in perofrmance from Carnegie Mellon University, and Post Graduate diploma in Orchestral Performance from the Manhattan School of Music. He has held fellowships as Principal Bass of the National Repertory Orchestra (Breckenridge, CO), Pacific Music Festival (Sapporo, Japan), Music Academy of the West (Santa Barbara, CA), and toured Asia, Europe, Mexico and South America with the Verbier Festival Orchestra. In addition, he has performed under the batons of Charles Dutoit, Kurt Masur, Jiri Belohlavek, Michael Stern, Nemme Jarvi, Christoph Eschenbach, Jun Markl, and Fabio Luisi to name a few.

Back in the US while performing professionally with the Philadelphia Virtuosi Chamber Orchestra, Harrisburg Symphony, Sarasota Opera, Key West Symphony, and Akron Symphony he went back to school and earned a Post Baccalaureate Music Education Teaching Certification at Duquesne University in Pittsburgh, PA. During that time he was the Double Bass Professor at Dickinson College, a cutting edge liberal arts school.  After graduating from Duquesne University he began his public school teaching career in Texas at Cypress Ranch high school in Cypress Fairbanks ISD as an Assistant Orchestra Director where he worked from 2014-2016. He started teaching at Morton Ranch High School in August, 2016.

Most recently Mr. Katz has performed with the Austin Symphony Orchestra, Louisiana Philharmonic, Artosphere Festival Orchestra and other Regional Texas Orchestras. He is also a bass clinician, guest clinician and conductor around Texas. He currently holds the Assistant Principal Bass chair of the Symphony of Southeast Texas in Beaumont. 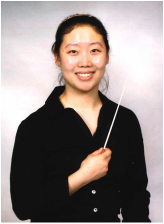 Ms. Aimee Cho
Ms. Cho is a Texas native and began playing violin in Klein, TX. She received her bachelor’s degree in Music Education from the University of North Texas in Denton and graduated summa cum laude with Honors on a full ride scholarship from the Terry Foundation. At UNT, Ms. Cho was primarily involved as a lead teacher in the UNT String Project- a community program that generates heterogeneous classroom teaching experience for Music Education Majors and also gives children in the Denton area the opportunity to learn how to play string instruments. She also had the opportunity to mentor and guide students as a Counselor for the UNT Summer String Institute in its first two years of operation, from 2014-2015.

Ms. Cho is a member of the Texas Music Educators Association, Texas Orchestra Directors Association, and the American String Teacher Association. In 2013, she had the honor of presenting a clinic with her colleagues at TMEA called “So You Want To Be A Music Major” to offer advice and guidance to high school students and young college students interested in pursuing music. In 2014, she wrote an Honors Research Paper entitled “Case Study: The Attentional Focus of One Preservice Teacher” which described how often a preservice teacher monitors and assesses the progress of students in a classroom rather than how often he or she focuses on teaching effectively.

Ms. Cho has taught the Morton Ranch High School Orchestra since the Fall of 2015. She is excited to see how much farther the program will develop and grow. In her summers, she teaches private lessons in the Klein area. She enjoys spending time with family, traveling, and trying all kinds of cuisines.
​
Powered by